Mind Over Marathon: Overcoming Mental Barriers in the Race of Life Buy now 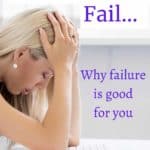 In this post, we are going to discuss why failure is good for you and how you can turn the negative concept of failure into success.  But before we launch into that mind-changing concept, I want you to understand one thing.  If you do not start, you automatically fail. The only definition I have of failure is not doing anything at all.

Why Failure is Good

In this series, I’ve already encouraged you to leave and quit, and today I urge you to fail. Yup, that’s right, I DARE YOU TO FAIL!!!

I dare you to fail as many times as possible because it will produce three characteristics in your life:

You can’t fail something you never attempt.

It’s kind of like me and the lottery. No matter how ginormous the winnings pool gets, I’ll NEVER win. Do you know why? Because I don’t play. Now, that’s not me being negative. I can talk to myself all day long about winning the lottery. I can believe 100 percent in my spirit that I will win the lottery. I can write a goal to win the lottery this year. But none of those success principles will help me because I can’t win something I don’t start.

We don’t have a chance to fail or win at something if we choose not to start.

If you don’t get out on the court, you can’t fail in the game of basketball – but you also can’t win.

If you don’t step across the start line of that race, you can’t fail – but you also can’t cross the finish line.

If you don’t take a risk on a project at work, you can’t fail – but you also won’t find promotion.

If you don’t open your heart and love, you won’t risk heartbreak – but you will also feel desperately alone.

I’m going to go a bit further and say that if you don’t start, you automatically fail. The only definition I have of failure is not doing anything at all. Those who risk more gain more. Those who love more are blessed more. Those who give more are given more. Don’t stay on the sidelines. Step into the race of life and choose to fail as many times as you need in order to win at your game.

RELATED: I Dare You To Quit

You may not think your passions or dreams can shake a nation, but they sure as ever can move somebody in your life, and if you have kids, those are the somebody’s who will be affected the most.

RELATED: I Dare You To Leave

This sounds strange, but it’s true. Every time you fail, you learn a way that doesn’t work, and you can start again with a fresh idea. Our failures can be our stepping stones to our goals and  successes!

“In life, the question is not if you will have problems, but how you are going to deal with them. Stop failing backward and start failing forward.”

The difference between average people and those who find success is their response to failure. Average people perceive failure as a negative and don’t want anything to do with it. They want to stay comfortable and avoid it at all costs. Successful people respond differently. They see failure as a learning tool, something that can grow their character and propel them forward.

Can Failure be Beneficial?

I have two quotes for you today.  This first quote comes from motivational speaker and writer Denis Waitley, and he says:

“Failure should be our teacher, not our undertaker. Failure is delay, not defeat. It is a temporary detour, not a dead end. Failure is something we can avoid only by saying nothing, doing nothing, and being nothing.”

The second quote is from James Dyson, yes, the vacuum Dyson!

“What I’ve learned from running is that the time to push hard is when you’re hurting like crazy, and you want to give up. Success is often just around the corner.”

While this post is more about starting than quitting, I want to share his story because it shows that failure can be beneficial.  It took him 5, 126 vacuum designs to get a product that worked correctly.  He failed 5, 125 times!!  But guess what?  In 2017, the Dyson company made 1.03 billion dollars.  All of those failures were worth it, don’t you think?

Along that same train of thought, did you know that Dr. Suess, the beloved children’s writer had his first manuscript rejected 27 times?  He failed 27 times before seeing his name in print.

In the end, we can conclude that failure is beneficial.  It is beneficial for us and for those whom our lives touch.

What Does the Bible Say about Failure?

We know that as long as we are following Christ then we are not failing.  My mind goes immediately to Paul, first called Saul.

We meet Saul as he is persecuting the early Christians.  He is zealous for the God of Abraham, Isaac, and Jacob, and he feels this new doctrine of Jesus as Messiah is false.  He wants to stop it from spreading and persecutes the early church.

God sets him straight while on the road to Damascus by speaking to him and blinding him for a period.  From this point on Paul gives his life to serve Christ and spread the gospel.  He founded churches all over what is now known as the Middle East, and his letters to them instruct and guide us still today.

Paul pens this verse to the church in Corinth after praying about what he refers to as a “thorn in the flesh” which he asked God to heal him of.  This is God’s response.

And He said to me, “My grace is sufficient for you, for My strength is made perfect in weakness.”

“Therefore, most gladly I will rather boast in my infirmities, that the power of Christ may rest upon me. Therefore I take pleasure in infirmities, in reproaches, in needs, in persecutions, in distresses, for Christ’s sake. For when I am weak, then I am strong.”  (2 Corinthians 12:9-10)

What does the Bible say about failure?  It says that we must be weak and allow God’s strength to carry us.  Isn’t that wonderful?  We don’t have to do it by ourselves!

As long as you are following God’s voice, you cannot fail.  He will guide you.  He confesses this again to the church in Philippi.

“I can do all things through Christ who strengthens me.”  (Philippians 4:13)

I dare you to quit worrying about failure. Failure is a necessary means to success, and if you’re not willing to fail, you’ll either never begin, or you’ll quit at the first sight of failure.

We need to redefine failure. When you fail, it actually means you’re willing to start, you’re willing to try and adjust, and you’re moving forward. Failure isn’t a bad thing, and it’s actually necessary on the path to success. Are you ready to fail the most if it means winning your dream?

I hope this has given you the courage you need to accept that failure is good for you and jump in with both feet!

Did you know we have a FREE online community available for you? If you’re not a part of it already, this is the perfect place to get support and encouragement as you use your passions to enhance your productivity and spiritual growth so you can go after your God-given goals.

Download the FREE 10 Disciplines Checklist to determine where you are at with your goal and what ingredient you want to add next as you pursue the finish line.

I’d love to hear from you! Leave a comment below and let me know, are you willing to allow failure to propel you forward?

Step into the fire and come out stronger!

If you want to stay at the forefront with me, sign up for my newsletter where I bring mindset, goal-setting strategies, and encouragement directly to your inbox, and you will be in the know for future podcast episodes!

Previous Post: « How to Redefine Your Beautiful Life
Next Post: What You Need to Know to Build Your Immune System »

This site uses Akismet to reduce spam. Learn how your comment data is processed.

Gabe Cox is an author, podcaster, and coach with a mission to help you step into the fire of refinement so you can come out stronger and crush your goals, God’s way. She uses her passion for running to explore ideas around productivity, intentional living, and spiritual growth.

Join the Simplicity and Motherhood Community!

Red Hot Mindset is a participant in the Amazon Services LLC Associate Program, an affiliate advertising program designed to provide a means for sites to earn advertising fees by advertising and linking to Amazon.com.

We were literally in the clouds on our hike up the

Happy Father's Day to the best dad in the world --

Does gratitude initially come to mind when you fac

Today marks my high school 20-year reunion (I can'

What do you do when you are taken off course? How

Life is better with sweet friends to share it with